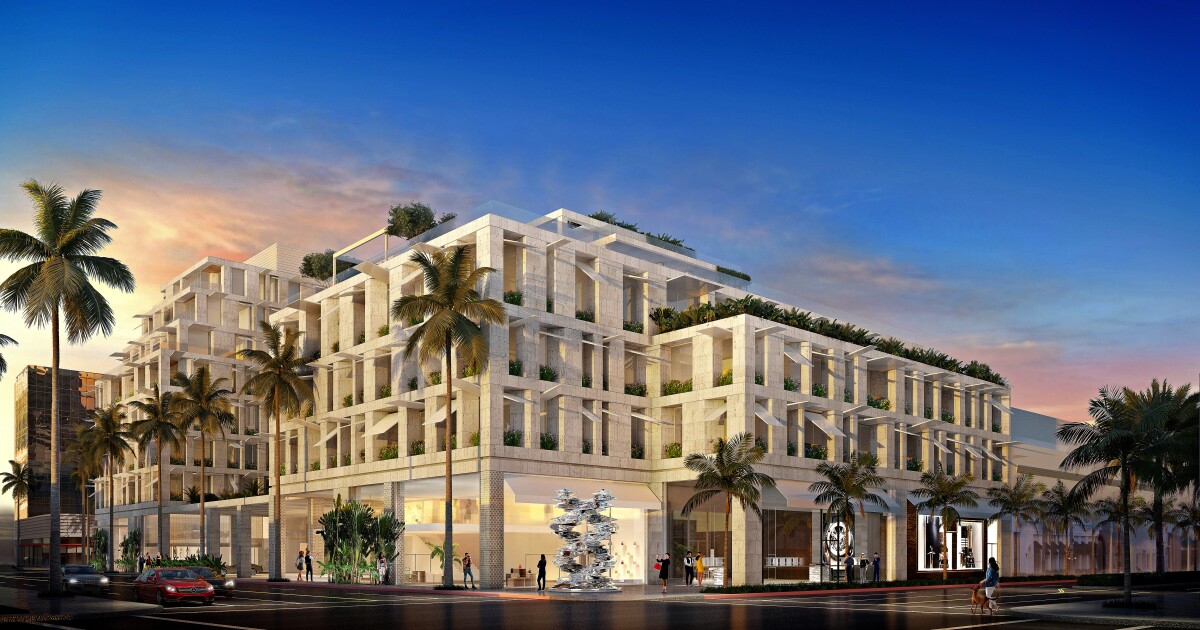 French luxury goods purveyor LVMH plans to expand its presence on Rodeo Drive in a big way — with an ultra premium hotel intended to be the most deluxe inn in Beverly Hills, which already has its fair share of deluxe inns.

The parent company of brands such as Louis Vuitton, Givenchy and Dom Perignon recently applied for city permission to build a 115-room hotel on property it owns at the corner of Rodeo Drive and Little Santa Monica Boulevard.

Although the development seems incongruous during the widespread coronavirus-related business shutdown that is also slamming hotels, LVMH regards it as a long-term venture that wouldn’t open until 2025 and would be held by the company for many years to follow.

In keeping with Rodeo Drive’s international reputation for over-the-top retail glamour, the Cheval Blanc is intended to be a notch above the competition in Beverly Hills’ high-end hotel market, known for such famous hostelries as the Beverly Hills Hotel and the Beverly Wilshire.

“The hotel that they are proposing is at the highest end, at a part of the market that maybe is not being met right now,” said Masa Alkire, principal planner for the city. “This is supposed to be the upper echelon of hotels.”

LVMH and Marino are unabashed about their intention to hit the swanky five-star heights for a certain subset of wealthy travelers. Room rates haven’t been set yet, but they’ll be among the highest.

“The Cheval Blanc is not a democratic price point,” said Anish Melwani, chief executive of LVMH Inc. in the United States. “This is high-luxury, expensive rooms” catering to people who can enjoy shopping jaunts on Rodeo Drive.

Unlike most full-service hotels, the Cheval Blanc will have no banquet or conference facilities, or other group business, he said. “This is meant to be a home away from home for that global luxury traveler.”

The challenge for LVMH is that the homes, or multiple homes, of these elite travelers are “spectacular,” Melwani said.

Cheval Blanc rooms will be “very large,” the company said, supported by restaurants, spas and luxury retailers, probably including LVMH brands that currently rent their stores on Rodeo Drive. The hotel will have two swimming pools, including a private penthouse pool, and a private club.

The diverse elements packed into a prominent urban setting added up to a design challenge for Marino. He displayed no lack of confidence, however, about his ability to make the Cheval Blanc stand out among the local competition.

“All the hotels in L.A. are just a little tired,” said the New Yorker, who was once described by Architectural Digest as “a leading architect for the carriage trade, and the architect for fashion brands.”

If he is successful, Marino said, the hotel will look like it has been there for 50 years and will remain timeless for decades to come. To that end, the Cheval Blanc will be clad in imported French limestone, the same stone used to make “all the really classic chateaus” in France, he said, including the historic Chateau de Chantilly and Palace of Fontainebleu.

“I think we need this very warm color for Southern California,” he said. “It will be soft and beautiful when Beverly Hills sun hits it.”

Every window will be a different size, Marino said, “which is insane from a construction standpoint, but very human. I wanted a very humanistic approach.”

Room windows will also have their own button-operated sunshades. He hopes no two of them are ever left at the same angle so the exterior “will never look the same way twice.”

He also hopes the overall design will improve the pedestrian experience on the northern edge of Rodeo Drive’s famed shopping district, where “people get to the end, shrug their shoulders and walk back.”

Future visitors may be tempted to instead turn right to walk past the entrance of the hotel on Little Santa Monica toward a roomy cafe on the corner of that street and Beverly Drive. The hotel would stand on parcels owned by LVMH that were formerly occupied by Brooks Brothers and the Paley Center for Media.

The hotel will have “art everywhere,” Marino said, including at the entrances and what he called a proposed graffiti wall on the newly realigned service alley “that will be the number-one selfie spot.”

The building itself would be sloped “like soft hills,” he said, rising from four stories on Rodeo Drive to nine stories on Beverly Drive.

“I tilted everything up toward the rear of the site trying to mask the black-mirrored Bank of America building, which I think is an eyesore,” the architect said.

The proposed height and relocation of a service alley are a deviation from the city’s general plan, and the project will require an environmental review and approval by the City Council before it could begin.

“There will be quite a few public meetings occurring before this process is over,” Alkire said.

LVMH declined to discuss what it will cost to build the Cheval Blanc, but Melwani said the company had spent “half a billion dollars” on real estate alone. “Beyond that, it’s too early to say,” he said.

LVMH opened the first Cheval Blanc, which translates to “white horse,” in the French Alps in 2006. There are two others in resort destinations and future sites in Paris, London and the Seychelles.

Real estate broker Jay Luchs of Newmark Knight Frank, who helped arrange the property sales, said LVMH’s investment is a testament to the enduring appeal of Rodeo Drive, which he expects to bounce back after the pandemic.

Other luxury retailers including Chanel have also purchased their stores there and do large-scale renovations every few years to stay current, said Luchs, a sign of its strength.

“If they weren’t making money, they wouldn’t keep reinventing themselves,” he said.

Melwani said LVMH regards Rodeo Drive as one of the “global pantheon of luxury retail destinations” and vowed that his company would not sell its prime Beverly Hills real estate development site as others have done in recent years.

“We are not flippers,” he said. “We have been citizens and investors in the community for a long time and we are doubling down.”

Source of this (above) article: https://www.latimes.com/business/story/2020-04-01/rodeo-drive-hotel-planned-by-french-luxury-retailer-lvmh